Strong community and volunteer opportunities a “pretty big get” in retirement

This feature is part of a series about what makes Happy Valley such a popular destination for retirees. We interviewed individuals and couples about what drew them to the area and about the ways they contribute time, experience, leadership and business knowledge to the community. Hear how today’s retirees are bringing resources and expertise to the area, turning ‘Brain Drain’ into ‘Brain Gain.’ 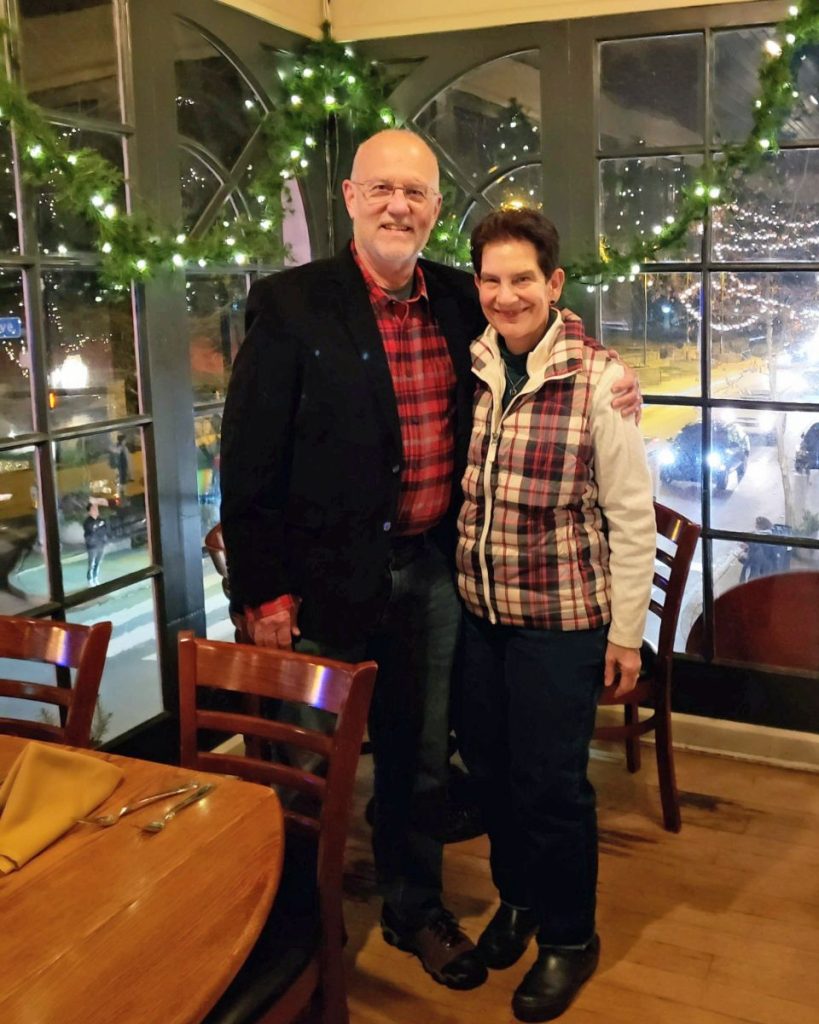 The first time Greg Guise moved to State College, he jumped in with both feet. “I was a student from 1970-1976,” he remembers. “I worked full time as the chief photographer of the Pennsylvania Mirror while I was a student. I’d come from Bedford County, so this was a pretty big town — a diverse community.”

While he was at Penn State, he covered the Hurricane Agnes flood in 1972, and took a picture of Heisman winner John Cappelletti that’s still on display at the Tavern. Over the next 40 years, Greg worked his way up in the news world — a journey that he says was boosted from the motivation and critical thinking that he gained at Penn State. As a videographer, he worked in Detroit and then Washington, D.C. for CBS affiliate WUSA for 35 years, and then Al Jazeera English Channel as senior North American camera man, editor and videographer. “I saw lots of bad things,” he said of his decades as a journalist. And what he experienced ultimately influenced his decision to move back to Happy Valley.

“I’ve seen a lot of civil unrest. Neighborhoods torn apart, areas gentrified,” he said. “I’ve come to realize the importance of strong communities. It’s about donating more than money — it’s about the people, and it’s about investing time. The investment of time is what builds neighborhoods and communities, safety, quality of life, growth. It’s so important.”

So when he and his wife Debbie started looking for a place to retire, the first thing on their list was community. But that wasn’t all that they were looking for.

“There were seven main things we were looking for,” Greg said. “A really good community. We wanted a compact community with lots of amenities without a lot of driving. We wanted to be a reasonable driving distance to our kids and grandkids in D.C.”

Their search took them along the East Coast from Richmond, Virginia to Wilmington, North Carolina, but ultimately brought them back to Happy Valley. “We just didn’t have a connection,” he says of the other destinations.

“There’s a quid pro quo here,” he said. “You can roll up your sleeves and do whatever. It is incredible to find a place where people can pitch in and get integrated into the community. It was a pretty big get for us.”

“There’s a quid pro quo here,” he said. “You can roll up your sleeves and do whatever. It is incredible to find a place where people can pitch in and get integrated into the community. It was a pretty big get for us.”

He and Debbie volunteer throughout Happy Valley. Greg works with the local amateur radio operators to build and operate a radio relay that supports the NOAA Skywarn system — a task that includes hiking up mountains to install radio equipment.  Debbie, who spent 40 years as a primary school teacher, is an active volunteer at the State College Friends School. The couple works with the YMCA Anti-hunger program, and Greg does photography and videography for the Alpha Fire Company, the largest volunteer-run fire company in the state. “Before we could give money, but now that we’re retired, we are able to give time. It’s very rewarding.”

Beyond the ‘get’ of community, Greg says that Happy Valley has ticked off the other boxes as well. “This is a safe place. And, although there are limitations, it’s a compact place where you can see Broadway shows, get groceries, and choose from a variety of restaurants and still be ten minutes from home.”

After a lifetime of working 70+ hours doing a job where he said it was a benefit to have Attention Deficit Disorder, Greg enjoys that every day — and every season — is different in Happy Valley.

“The nature of retirement in Happy Valley is anything you want it to be,” he said.

In the next story in the series, meet an alumnus who dropped out of Penn State to work at the Deli for five years … a move that turned a job into a global career and eventually back to “come back home” to Happy Valley.

Cara Aungst writes about industry, innovation and how Happy Valley ideas change the world. She can be reached with story ideas and comments at Cara@AffinityConnection.com