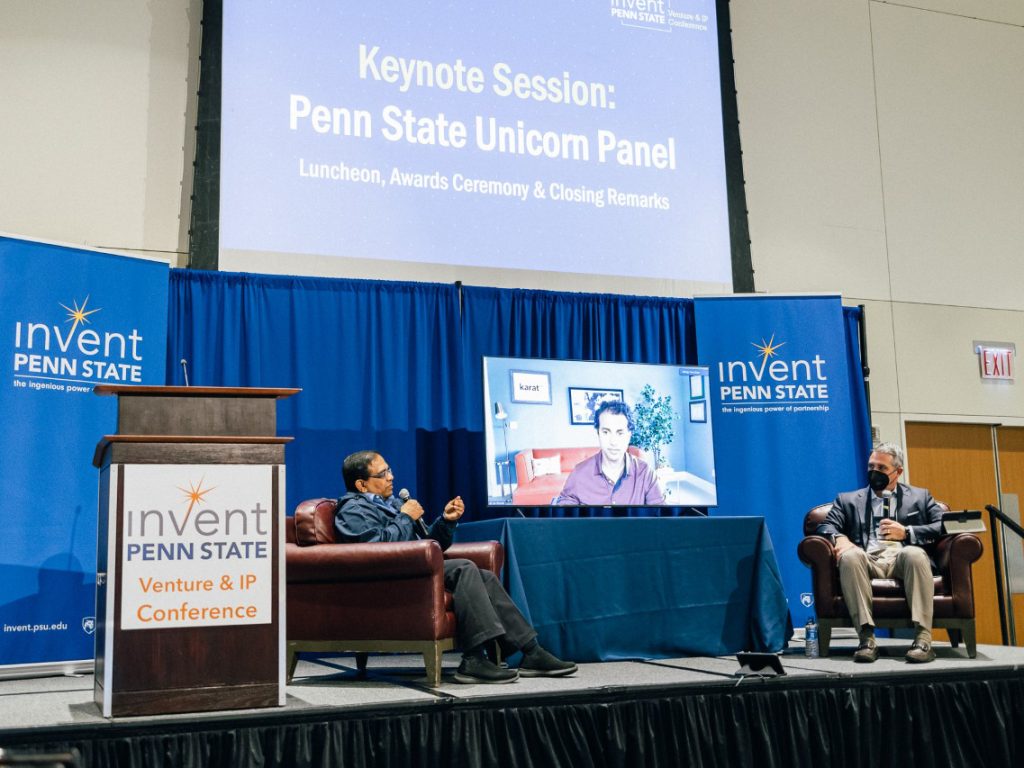 On April 28-29, the 2022 Venture & IP Conference took place at the Penn Stater Hotel and Conference Center in Innovation Park. It was bookended with a first and a last: the first time that the event has been held in person since 2019 and the last conference under President Eric Barron, the visionary behind the Invent Penn State initiative. In between these milestones were more than 450 attendees representing over 60 companies from the Penn State entrepreneurial ecosystem, plus angel and venture investors looking to help innovators move their technology into the marketplace.

The event continues to be one of the largest tech startup conferences in the Mid-Atlantic and stands apart because of its connection to Penn State-driven innovation and entrepreneurship.

After Thursday’s first round of venture connection — where entrepreneurs met with angel and venture investors to talk about funding their startups — Penn State's Tech Tournament took place. Seven entrepreneurs with disruptive innovations boasting significant commercial potential and resulting from Penn State’s research enterprise competed for a first place prize of $75,000—funding to jumpstart their concept toward the next level.

“This is a place of authenticity, a place where people are grounded." 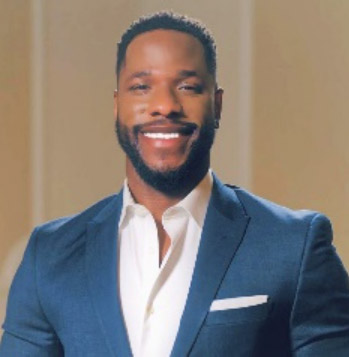 Penn State connection: Isikwe, a former pharmacist (and children’s book author) is graduating from Smeal College of Business with his MBA in June 2022.

The innovation: Chiima Therapeutics seeks to revolutionize chronic and acute pain, specifically in the treatment of endometriosis in women, with transdermal, non-opiate solutions.

“I’m such an advocate of solving pain,” Isikwe said. “Many times opiates are prescribed to treat endometriosis — a solution that can create more problems than it fixes. Pain shouldn’t be a death sentence for people who are creating life. Women need better pain care.”

Moderator Erika Swift, Operations Director for Penn State College of Medicine's Center for Medical Innovation, pointed out that over the past several years, the Tech Tournament has helped Penn State technology make significant advancements into the marketplace.

“In 2018, SIG Medical won second place, enabling them to refine their device and take it into clinical trials,” Swift said. She said that the company ultimately sold the technology to Zimmer Biomet, where it remains the only FDA-cleared minimally invasive rib fixation system on the market. That same year, Phospholutions, an Innovation Park-based company focused on enhancing the efficiency of global phosphorus with its product RhizoSorb,,won first place. In 2021, the company raised $10.3M in Series A funding. ConidioTec won People’s Choice that year with its nontoxic pesticide Aprehend, which has gone on to become a top choice for exterminators around the country, making a major impact on the hospitality market’s fight against bed bug infestation.

The seven startups were:

The winner was announced on Friday: Illuminate Therapeutics won $75,000 for its disruptive technology to battle head and neck tumors.

"That’s where Penn State is so strong — creating stuff that is real.”

Daniel Hayes, professor of biomedical engineering in the College of Engineering, is the principal investigator for the startup. He says that Illuminate Therapeutics’ technology takes advantage of the $1 billion head and neck cancer treatment market by using light-controlled nanodelivery to provide precise, minimally invasive tumor reduction and mitigate severe side effects relative to current treatment protocols.

Unicorn success stories: “Penn State took a shot on me”

Along with announcing the Tech Tournament winners, Friday was filled with Penn State success stories, from a session with Tuft & Needle co-founder JT Marino to a Unicorn panel with Ash Ashutosh, Global Director of Solution Sales at Google, and Mo Bhende, CEO and cofounder of karat.

Both Ashutosh and Bhende, whose venture-backed startup companies have crossed the $1B valuation threshold, started their journeys at Penn State.

Ashutosh said, “I went to Penn State 33 years ago and this is my first time back. The bar [here at the University] has been raised on many different levels. “I probably wouldn’t be able to get in today,” he said with a laugh. He said that he came from southern India to attend Penn State and was captivated with autumn in Happy Valley … but then came winter. “Oh, trudging through that snow!” he said.

“All it takes is one — one investor to believe in your idea, one cofounder. Penn State took a shot on me and I feel very responsible for giving a shot back. Being a Nittany Lion was an amazing experience for me.”

He said that attending as a student, he and his wife couldn’t afford to each buy their own cone at the Berkey Creamery, and would share one. Today things look a lot different for the couple, but Ashutosh said they’ll still split a cone. “Back then, we couldn’t afford two, and today I really shouldn’t be eating that much ice cream.”

He spoke highly of the environment that Penn State fosters for innovation. “This is a place of authenticity, a place where people are grounded. Many times venture firms invest in virtual tools and software, but the Innovation Hub is filled with 3D printers, things that are built for real. That’s where Penn State is so strong — creating stuff that is real.” 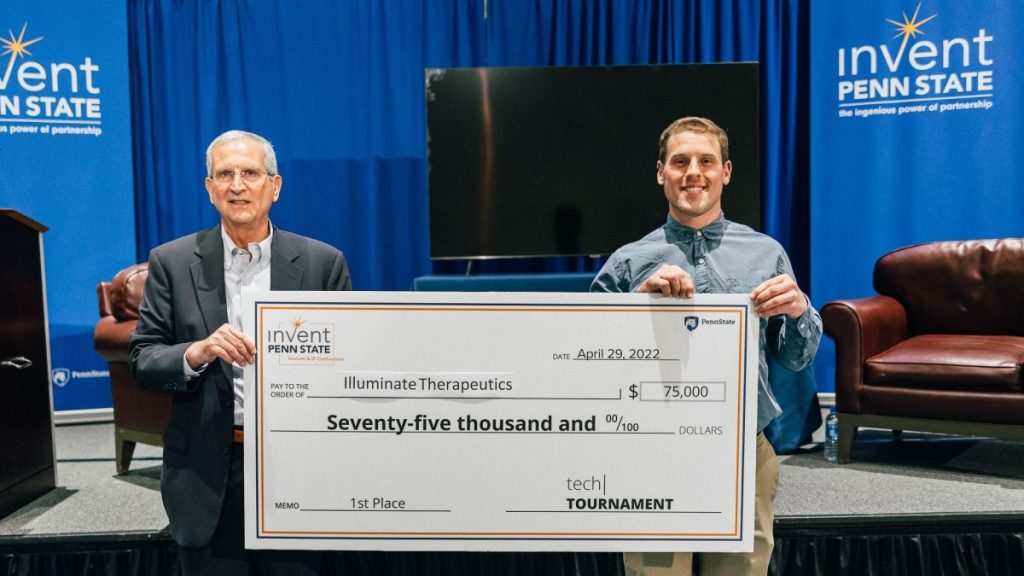 Bhende agreed. “Penn State gave me a chance,” he said. He said that he did “all the right things in high school” but still got rejection after rejection from colleges…. Until Penn State. “Penn State was my unlock,” he said. “All it takes is one.”

He said that has become his mantra. “All it takes is one — one investor to believe in your idea, one cofounder. Penn State took a shot on me and I feel very responsible for giving a shot back. Being a Nittany Lion was an amazing experience for me.”

“There are many, many more founders here,” he said, looking out into the crowd. “They are doing the good work, representing Penn State.”