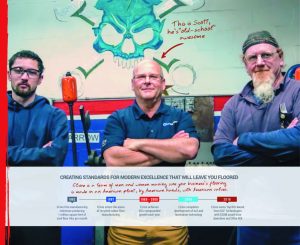 Becoming truly badass at anything requires you to step away from the status quo and start looking for a greater destiny. Think Bon Jovi. Al Pacino. Tom Brady. You think they settled for the status quo? Heck, no!

Scott Geib at ECore didn’t settle for the status quo, either.

Every plant experiences average, everyday maintenance issues. While some might accept them as part of the job, Scott Geib did not. In fact, he knew his flooring plant was consistently losing valuable time to the same old issues, and that the ensuing firefighting was eating into profitability.

As a self-described “old-school tech user” (we’re talking flip phone, people), Scott didn’t immediately jump at a cutting-edge solution. He stuck with what he knew—a combination of time-based maintenance and periodic "stethoscope" vibration readings. In hindsight, he says, he didn’t understand wireless systems and he was skeptical, maybe even a little afraid.

Could he implement and oversee a wireless system he didn’t know much about? Would his team get on board or would they revolt? Would his job as maintenance manager evolve or would it be obsolete?

ECore manufactures cutting-edge products but they sometimes must do so with old machines–in this case, a powerful cutting machine built in Germany in 1952. The machine is a workhorse, in operation for nearly seven decades (they don't make 'em like they used to!), but keeping the machine in tip-top shape becomes harder every year. As of Summer 2019, only 12 of these machines remain in the world.

A critical component on this machine is its gearbox, which is lubricated via a difficult to reach pump system. Historically, servicing this gearbox includes a combination of time-based maintenance and occasional visual or "stethoscope" inspections. These methods, however, leave ECore vulnerable to failures that no one sees coming.

Scott Geib took a gamble. He invited KCF Technologies to his factory and installed a handful of wireless vibration and temperature sensors on this machine. Soon thereafter, one of those sensors began picking up unhealthy signals from the gearbox...holy schnikes!

Keeping a 1952 German cutting machine in tip-top working condition was becoming harder and harder each year.

Based on the alarms and phone calls that KCF made, Scott's team inspected the gearbox and discovered a leak in the lubrication system that, within days or hours, would have run dry and destroyed the entire gearbox. Had Scott not stepped up with this cutting-edge solution, here's what ECore would've suffered:

Instead, Scott's team fixed a small leak in a lubrication pump and never missed a beat. No stress, no lost profits, no factory shutdown. Scott earned a promotion. Imagine if your company had avoided its most recent machine failure. How much did that incident cost you? What would the benefit be if you, like others, eliminated over 65% of your unplanned downtime?

So many of the emergencies American industry faces related to downtime and inefficiency are no longer necessary! Like Scott, consider 24/7 machine health monitoring for your key assets. Scott's only regret? “Not getting the system in there faster.” No stress, no lost profits, no factory shutdown. Plus uninterrupted production and delivery of comfortable, safe, functional flooring to ECore's end-customer heroes!