If you were a 90s kid, you probably know AIRWALK shoes. Staple footwear for skaters, even Tony Hawk was a brand ambassador. But did you know that in its heyday in the 1990s the company’s world headquarters was in the Greenwood Shopping Center on old Route 220 in Altoona? AIRWALK was nestled into a storefront between the Ultimate Bagel and Meadows Ice Cream and a few doors from the “Day Old Bread” store.  In 1997 the company expanded to Boalsburg.

During the height of its popularity in the mid ’90s, AIRWALK was rated by Teenage Research Unlimited as the 12th coolest brand of all brands and the 3rd coolest footwear brand. Footwear Industries of America named AIRWALK the Marketer of the Year in 1996. MTV was rotating its edgy TV spots, fashion magazines featured full-page ads, and big cities were plastered with ads on plywood at construction sites. Consumers, predominantly teenage boys, loved AIRWALK because they identified with what the brand stood for – irreverence and self-expression. The company’s goal was to build on this loyalty and become a youth lifestyle brand beyond just footwear, but ultimately, it fell short.

AIRWALK’s journey has been profiled and debated in many articles and in New York Times best-seller The Tipping Point. State College business owner Greg Woodman began working with the brand as a marketing consultant in 1993, then joined the company as VP of marketing in 1994 until the brand was sold in 1999. He helped to drive the company’s rapid growth from $16 million to over $200 million in less than 5 years. He shares his insights on AIRWALK’s local beginnings, its lightning-speed growth, the sale to a private equity firm in 1999, and where the brand is today.

HappyValley Industry: Can you describe what drove AIRWALK’S major growth from ’93 to ’96?

GW: The short answer is that AIRWALK knew its audience—teenage boys—and focused exclusively on connecting with them. The brand nailed the skate culture at the time and even became part of shaping it. Customers were more than kids who bought shoes, they were part of a community that identified with specific beliefs and values that AIRWALK represented.

HappyValley Industry: What was the competitive landscape like at the time?

In 1996, the year AIRWALK reached $200 million, Vans was at $120 million and Skechers just $80 million. These 3 companies, along with Doc Martens, were competing head-to-head to lead the “Lifestyle category” that was emerging. AIRWALK owner George Yohn saw this movement toward Lifestyle shoes early on. Both Vans and Skechers were markedly smaller than AIRWALK. Vans had positioned itself exclusively as a Southern California sport-lifestyle brand, specifically tied to action sports and music. While Vans sold technical skate shoes, the majority of their sales volume was active casual fashion shoes. Little known side note, when Fast Times at Ridgemont High came out in 1982, Vans took off big-time, and in 1984, the company declared bankruptcy. Growth is tricky! Skechers went public in 1999 and, as we all know, doubled-down on their play for the lifestyle category. 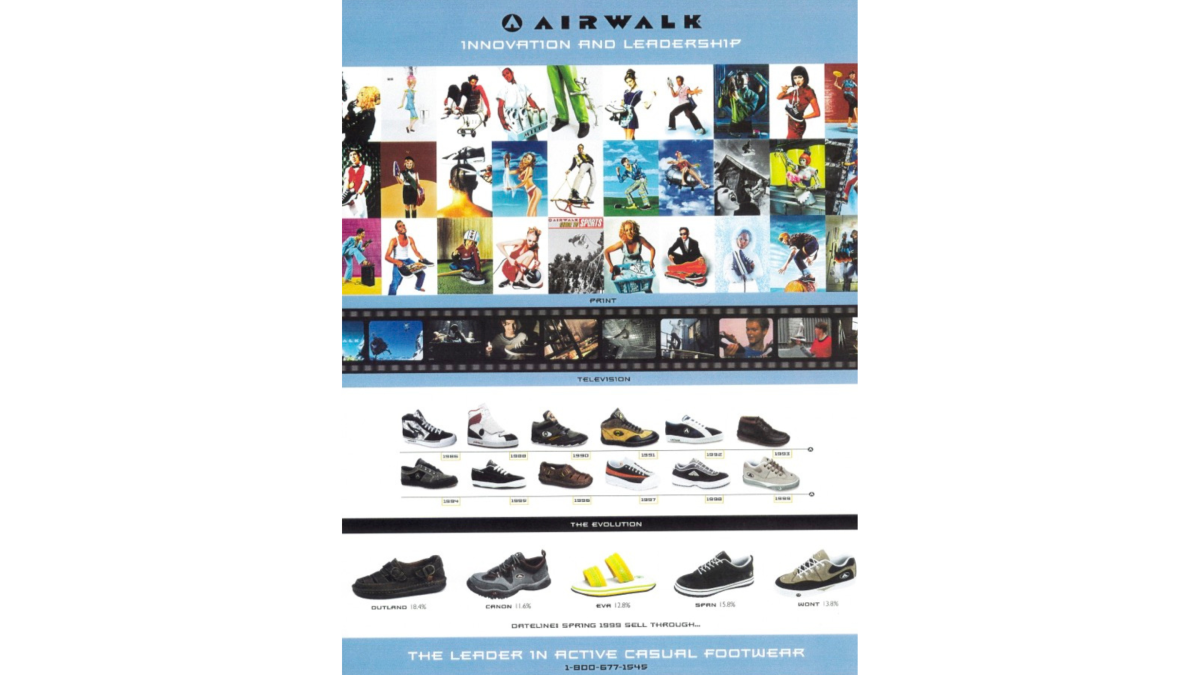 HappyValley Industry: What happened after AIRWALK grew so fast?

GW: Growth, especially fast growth, eats up capital. The company was financed by the owner, George Yohn. At 73, he was tired of financing every problem and was in poor health. He decided to sell. George died one year after the sale from a heart attack.

Unfortunately, management became divided on the brand strategy; leadership was not equipped to handle how quickly AIRWALK became a global brand. At that stage, it’s essential to know with 100% clarity who you are. Despite George’s position on creating a Lifestyle brand and the company’s success, a civil war over the company’s direction led to dissension and diluted the vision and the lack of a clear, singular focus diffused the impact of the marketing budget. AIRWALK lost sight of its North Star.

Potential buyers also had strong opinions on the direction the company and brand should take: Lifestyle vs. Technical Skate/action sports. The management team, already divided on this issue, began plotting their exit strategies based on prospective buyers. When it became apparent that Sunrise Capital, the eventual buyer, wanted the brand to focus on the Technical Skate market, team members who were advocating for a Lifestyle strategy moved on. Personally, I was in the Lifestyle camp 100%, along with George Yohn. I felt we could continue to build on the action sports heritage as part of the brand. If you were close to the consumer, it was clear that the ship—the market—had sailed decidedly toward Lifestyle.

The new private equity owners took all their market insights from those who favored a Technical Skate strategy and drove the brand into bankruptcy within three years. They moved the brand to Colorado and brought on a team with expertise in performance athletics.

If you look at how Skechers and Vans advanced, they read the market and embraced Lifestyle brand positioning. Vans 2022 revenue is $3.47 billion and Skechers is around $7.4 billion. George was right! AIRWALK, on the other hand, stumbled and bounced around, ending up down-market at Payless stores until it was sold to Authentic Brands in 2014.

HappyValley Industry: What are the biggest lessons businesses can take from AIRWALK’s story?

Most importantly, follow your North Star. A company’s vision and core beliefs have to drive its strategy. And that vision and those beliefs must be based on consumer insights. Staying close to the customer is essential.

Also, when you’re ready to grow or the market needs you to grow, cash is key. Get a pre-mortem financial plan in place to help you weather the storm and avoid ‘growing broke.’ Because when you desperately need investment, it can be tempting to accept help from places that don’t offer the best stewardship for your brand.

Finally, the right people are crucial, especially in leadership roles, but it’s about more than just experience, knowledge, or skills. An effective management team must be committed to aligning around a shared vision. It’s the only way to keep the company moving in a single direction and to ensure that the brand stays true to its values.

It is nice to see AIRWALK still alive and part of a portfolio with some high-quality brands. Authentic Brands is set to go public in a year or two. If you purchase their stock, it will be bet on “brand value.” What is the value of a product in the heart and mind of the consumer? It’s an emotion that does not appear on a balance sheet. Despite being dragged through the mud for 22 years, it is amazing that the brand equity of AIRWALK is still alive. How cool it would be if AIRWALK had done some things differently and a $5 billion dollar brand was here in Happy Valley! I’m still cheering it on from afar.

Greg left AIRWALK after its sale and purchased Stewart Howe Alumni Service, which he renamed Affinity Connection. Based in Downtown State College, the company provides marketing and publishing services with a specialty in storytelling for clients ranging from non-profits to small businesses. Affinity Connection also publishes HappyValley Industry and provides services to Startup Alleghenies to publish its weekly eletter on small and emerging businesses, The Alleghenies.