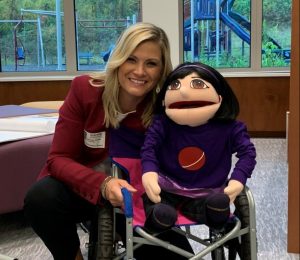 If you’ve ever seen Pixar’s movie “Inside Out,” you may have already gotten a taste of how TEAMology helps children regulate and control their emotions.

Founded in 2016, TEAMology is the brainchild of CEO Linsey Covert. As a grad student at Penn State, she learned how developing relationships, learning more about teamwork and social emotional can help kids interact with others, which can have positive results and create a sense of belonging both in and out of school.

“The more time we invest in educating and providing information and coping skills to young kids, the less we see outcomes such as incarceration, substance abuse and school violence later in life,” she said.

“The early research I was doing in grad school didn’t give any framework for cultivating that,” said Covert, who, at the time, was working with a client on related issues. “This little boy really struggled. He was depressed and I tried to build a relationship with him,” said Covert, explaining that, when she added group activities to her interactions with him, his moods soon changed. “It was then that I realized that interpersonal relationships have a lot to do with how well students adjust to their environments and how equipped they are to tackle issues in the future,” she said.

Covert later went on to become a school counselor. This enabled her to further observe the role that social and emotional wellness played in the overall wellbeing of children. Then, this experience inspired Covert to create a curriculum that would help students with social, emotional and mental health and wellness by using six, digital, fictional characters that children can relate to and interact with on a computer.

During this time, Covert remained in touch with her Penn State colleagues, who were aware of her new curriculum and were spreading the word. “I received a phone call informing me that there were donors who wanted to offer an endowment through the Penn State College of Education, with a goal to reduce bullying, so bullying prevention is also part of this curriculum,” said Covert.

After the phone call, Covert was able to build an even larger network and, in 2014, found herself seated in a room at Ben Franklin Technology Partners, an initiative that provides support for early-stage, technology-based startups. This led to a 10-week Techcelerator bootcamp where she learned how to pitch her startup idea and the steps involved in forming a company. Through Ben Franklin, she won money needed to start her company and she proceeded to work on building a teacher platform.

“We always have our characters build bridges between kids and adults, so they ask children whom [in their lives] they feel comfortable enough to trust. This way, we can point them in a direction in real life, in order to build those important relationships,” said Covert.

Covert’s next step was to meet with Nittany AI Alliance director Daren Coudriet to discuss leveraging AI technology to further develop TEAMology to help kids develop their social, emotional and mental health with the help of the program’s characters. Soon after, Covert was partnering with Google, obtaining cloud credits to help pilot the program, starting with Ruby, a character who teaches resilience. 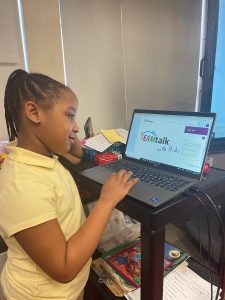 “We heard over and over again that the kids preferred speaking to Ruby, rather than to parents and teachers,” Covert said, sharing her idea on why that is. “Ruby is non-threatening, non-judgmental, is there to help and she gives things for kids to practice in the moment, like breathing exercises.”

One thing Covert wants to be clear on, however, is that these characters aren’t meant to supplant parents or teachers. “We always have our characters build bridges between kids and adults, so they ask children whom [in their lives] they feel comfortable enough to trust. This way, we can point them in a direction in real life, in order to build those important relationships,” said Covert.

In addition to Ruby, there are other characters, or bots in the curriculum, like Harper, who helps others; Paco, who promotes positive change; Amelia, who promotes acceptance; Philo, who helps with problem solving; and Lamar, who teaches leadership. What’s particularly promising about the characters, according to Covert, is that the more children interact with them, the more descriptive and effective the bots become.

Covert has high hopes for the future of the platform, especially in the era of Covid-19, when many kids may need extra help with mental health issues.

She also said that TEAMology will be bringing on an additional staffer to kick off the New Year. They plan to launch the new platform commercially in January of 2023. Lindsay Fairman, who has been a working partner since July, will be leading the development effort on the new platform. Covert adds that parents are seeing the value of the program and that there has been new interest from the health care industry as well.

Overall, Covert believes that focusing on SEL will lead to more adaptive and happier children, and that drives TEAMology’s approach. “The more time we invest in educating and providing information and coping skills to young kids, the less we see outcomes such as incarceration, substance abuse and school violence later in life,” she said.

Do you know of a Penn State or Ben Franklin-powered startup that’s making a difference in children’s lives? Let us know about it here!