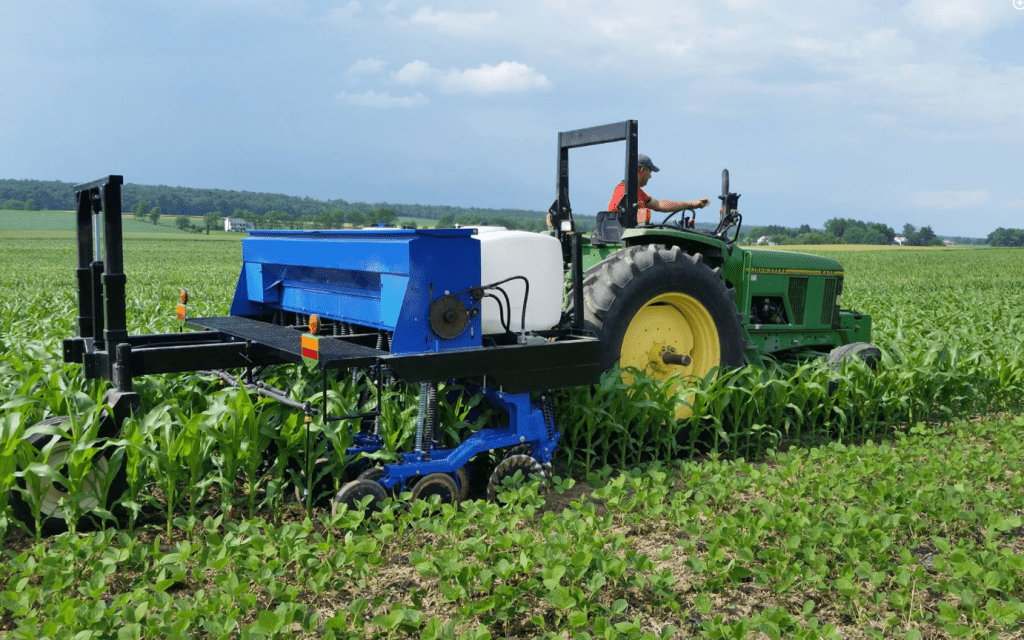 What started as a research project at Penn State Agronomy Research Farm has grown into an exciting, innovative business offering farmers a unique tool for success. As an added bonus, InterSeeder Tech also has the potential to increase agricultural yield while mitigating potential environmental downsides.

It all started with four people sitting around a table, trying to solve a problem. InterSeeder Tech co-founders Chris Houser and Corey Dillon were working on their master’s degree projects while co-founders Greg Roth and Bill Curran were faculty members. From that table, the idea and concept grew and, eventually, the four were able to take the technology they invented out into the field and prove its worth.

Plants help protect soil from erosion, keeping sediment out of the water systems and collecting nitrogen and phosphorus. By holding the nutrients at the field level, they don’t leech into creeks, rivers and water systems.

“At the time, I was working on a corn stover for ethanol project, trying to quantify loss of soil carbon,” notes Houser. “The idea was to use cover crops to reintroduce lost carbon back into the soil, a concept which was relatively unheard of when it came to corn and grain crops in this part of the country.”

That sparked the idea for the InterSeeder.

“We developed the Interseeder under the mindset that farmers are going through their fields at [a certain] time of year to put down nitrogen to feed their corn crop,” says Houser. “Often, they’re also putting down herbicides to clean up any weeds they may have. We also wanted to be able to put this cover crop down. That led us to develop the InterSeeder, which does all three.”

Dillon adds, “Usually farm equipment just does one thing. But this implement can accomplish three to four tasks.”

Not only is it efficient and effective, but the InterSeeder also has the potential to protect the ecosystem. That’s the magic of incorporating the cover crops. Plants help protect soil from erosion, keeping sediment out of the water systems and collecting nitrogen and phosphorus. By holding the nutrients at the field level, they don’t leech into creeks, rivers and water systems. In that way, cover crops benefit not only farmers, but everyone in the ecosystem.

As Dillon explains, “It is one of the unique things that I’ve seen in ag, where we’re essentially able to increase yields while also improving environmental conditions. Increased yields potentially come at a cost of environmental compromise, but in this situation, we were able to increase corn yields while improving soil structure and water quality. That’s not always typical – usually when you increase production, it comes at a cost somewhere else.”

As Dillon explains, “It grew from there, once we were able to prove [the technology] in a research setting. Then, we kept scaling it up to the point where people saw what we were doing, and there was enough interest to commercialize it.”

The Rise of InterSeeder Tech

As part of their master’s degree work, the inventors often found themselves providing extension presentations. Interest quickly picked up, not only from farmers, but also from conservation districts and other universities, all of whom wanted to know how to get their own InterSeeder.

The co-founders of InterSeeder Tech relied on some of the vast resources Happy Valley has to offer. “We’re researchers and farmers. When it came to starting a business, none of us really had a clue.

Once it became clear that there was interest and commercialization was a viable option, the co-founders of InterSeeder Tech relied on some of the vast resources Happy Valley has to offer. As Dillon recalls, “We’re researchers and farmers. When it came to starting a business, none of us really had a clue.”

But they attended an entrepreneur bootcamp that made a lasting impact. As Houser remembers, “We were part of the incubator program at Penn State and we walked away from that with amazing mentors that helped us make sure we dotted all of our I’s and crossed our T’s to set up the business, protect our intellectual property and get manufacturing agreements.”

The inventors also spent roughly three years with Ben Franklin Technology Partners. “It was like Shark Tank every morning,” says Dillon. “Without that network, it would have taken us a lot longer and we probably would have had a lot more black and blues.”

While InterSeeder Tech has already been able to ship machines as far away as Canada and the western U.S., one of the team’s big goals is to place an InterSeeder in every county. And, although demand ebbs and flows to a large degree as commodity prices, interest in conservation districts and the availability of grants to facilitate the purchase of the equipment fluctuate, the future for InterSeeder Tech looks bright. Pennsylvania is a leader in the adoption of cover crops and the InterSeeder is just one more tool that farmers will have at their disposal.

As Dillon concludes, “One of the coolest things is that it’s a grassroots effort – no pun intended – right out Penn State Agronomy Research Farm.”