Out of Retirement, Into the Incubator: How TechCelerator Director Bob Dornich is Shaping the Entrepreneurs of the Future 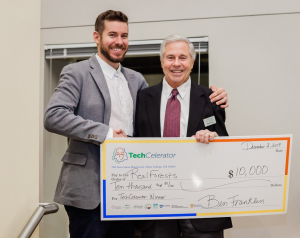 Having a strong support system is necessary for the success of any entrepreneur, particularly when they’re just starting out. Here in Happy Valley, one of the strongest supporters of budding entrepreneurs is Ben Franklin Technology Partners, one of the longest-running technology-based economic development programs in the country. Since 1983, Ben Franklin has been providing expertise, funding and access to expert resources to entrepreneurs throughout Pennsylvania.

One of the exciting ways that Ben Franklin supports budding entrepreneurs throughout Happy Valley and beyond? Its TechCelerator program. This startup accelerator program has hosted 25 classes over the past nine years, providing $42 million in startup funding and leading to the formation of 149 companies. It has created 356 full or part-time jobs and generated $28 million in revenue.

At the helm of the TechCelerator program is Director Bob Dornich. As a serial entrepreneur, Dornich boasts vast experience, having started eight businesses across a variety of industries, including retail, food service and equipment leasing. In 2014, he sold one of those businesses and made the decision to retire.

“Retirement, as it turns out, was not what I had expected,” Dornich recalls. “After having my finger on the pulse for so many years, I just didn’t get the fulfillment from being retired. My wife Joann saw a job posted from Ben Franklin and I thought I would give it a shot. When I saw that 77 people had applied for the job, I thought I had no chance. But here I am, four years later.”

What made the job prospect particularly exciting for Dornich was his own experience with Ben Franklin. Not only did Ben Franklin provide a loan to one of Dornich’s businesses, but he also had first-hand knowledge of the difference Ben Franklin’s mentoring services could make. He credits Ben Franklin’s support with helping his business become a success.

With that personal insight and his vast knowledge of the startup experience and understanding of a variety of business models, Dornich was a seamless fit for the Ben Franklin brand. On top of it all, he also boasts decades of coaching experience, beginning as a youth soccer coach in the 1980s and continuing throughout the years to include coaching the Penn State Club team, and now today’s emerging business leaders.

That coaching, for hopeful startups and entrepreneurs with great ideas, is invaluable. It’s also a source of inspiration for Dornich, a self-proclaimed “recovering entrepreneur,” who says that he’s having the time of his life working in what he describes as a dream job.

“When people get to that ‘Aha!’ moment, and you realize they understand what we were trying to teach them – it’s a true thrill,” he says.

In between those moments, Dornich spends a lot of his time teaching the TechCelerator’s 10-week class on business startups.

“I’m inspired by the companies that I can watch grow and add employees,” says Dornich. “In economic development, I think job creation is one of the most rewarding paybacks. It is easy to get inspired here with all the many disruptive and creative inventions and the technology that our ‘students’ create. We often get professors and post-docs in our classes, too, and I have to say that the ingenuity coming out of Penn State is mind-blowing.”

As many of his students can attest, Dornich himself is an inspiration. He recognizes that entrepreneurs aren’t normal. As he says, “They are, by their very nature, exceptional. They take risks where others dare not.”

For budding entrepreneurs seeking advice, he often turns to Calvin Coolidge’s quote about persistence, one of the most important elements for ultimate success: “Nothing in the world can take the place of persistence. Talent will not; nothing is more common than unsuccessful men (and women) with talent. Genius will not; unrewarded genius is almost a proverb. Education will not; the world is full of educated derelicts. Persistence and determination alone are omnipotent.”

Persistence has certainly played a role in Dornich’s own professional career and it is quickly shaping the reach of the TechCelerator program, which has recently expanded. Ben Franklin of Central and Northern PA encompasses 32 counties in the middle of the state.

“We currently reach all of them,” Dornich says, “and it’s thrilling to be able to work with entrepreneurs in the rural areas that might not normally have this resource at their disposal.”

And for those entrepreneurs, that resource is so much more than a mere educational program. As Dornich notes, “One of the best things about the TechCelerator is that once you are ‘in the family’ you are in for life and can come back anytime for advice, coaching and mentoring.”

To learn more about what Ben Franklin Technology Center has to offer, to view the schedule of upcoming TechCelerator programs or to find a location near you, visit https://benfranklin.org/