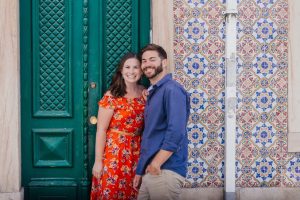 After moving from State College to Bloomington, Indiana, Leah Mueller and husband Jared Yarnall-Schane were just settling in when they received a call from Heidi and Rich Biever, owners of State College’s popular children’s theater program Singing Onstage. After nearly 20 years at the helm, the Bievers decided to move to Wichita, where Rich plans to join the Wichita State University musical theater faculty and Heidi will be a teaching artist in conjunction with Music Theater Wichita. They were looking for someone to take over Singing Onstage.

“Singing Onstage has offered a really beautiful outlet for creativity and confidence-building for young students over the years. Getting up on stage and singing and dancing in front of an audience is a really brave thing to do and it has been such a gift to the many students who have gone through the program.”

“I went home and spoke with Jared and he started putting together a business plan and running the numbers that weekend. We realized that it was a possibility … It was an opportunity we couldn't pass up. The State College arts community gave me so much as a young performer and I felt a strong pull to do the same for the amazing young students at Singing Onstage,” explained Mueller, who got involved in theater when she was 10 years old.

While growing up in State College, Mueller took advantage of the many performing arts opportunities available locally. “I would usually perform with the State College Community Theater every summer, and I took part in a Penn State program called Metastages when I was younger. I loved singing in the choir and performing in musicals at Mount Nittany Middle School and then later at State High,” said Mueller. She also performed with Singing Onstage when the Bievers started their business in 2003.

Mueller’s talent and the joy she found in performing led her to pursue a musical education degree from Penn State. Her education and her personal experience offer a strong foundation for running Singing Onstage.

Mueller said, “From my vocal pedagogy class on how to teach healthy vocal production to my experiences in Ensembles, it was all really valuable and will influence how I will model and teach my Singing Onstage students. I also really loved working with the Penn State NU Musical Theater Festival when I was a student. It was amazing to see a musical in its early stages and to work with the writers as they made edits in real time!”

Yarnall-Schane also graduated from Penn State, though in a very different field. He received his B.S. in mechanical engineering, but was also active in entrepreneurship as an undergraduate student. He utilized Invent Penn State for startup support and then later worked for Happy Valley Launch Box. Mueller shared, “His experience running his own business while he was a student at Penn State has helped him as we worked together to acquire Singing Onstage. Jared is very excited to own a business again.”

Yarnall-Schane will continue to work for the Biomimicry Institute where he is currently the director of innovation, helping scientists and entrepreneurs tackle systemic sustainability challenges through nature-inspired design. His role in Singing Onstage will focus on registering students, managing finances and marketing.

In a press announcement, Heidi said the couple was “an answer to our prayers.” She continued, “For Rich and [me] to say ‘yes’ to this incredible new opportunity, we had to see that certain things were in place to feel comfortable ending this chapter: principally, finding the right people to care for and nurture the students and families of Singing Onstage. It felt utterly perfect to have such a highly qualified former Singing Onstage student take over, who’s deeply connected to our community, already so beloved as a former teacher at the Delta Middle School and has the enthusiasm and support of her husband and family.”

"As theater makers, we are primarily storytellers. I love that these stories can inspire empathy on a deep level. The stories we're telling may be fictional, but the way they make you feel is very real.”

What’s next at Singing Onstage

Singing Onstage has long provided State College youth with opportunities to learn, grow and perform in a nurturing environment. Mueller explained, “Singing Onstage has offered a really beautiful outlet for creativity and confidence-building for young students over the years. Getting up on stage and singing and dancing in front of an audience is a really brave thing to do and it has been such a gift to the many students who have gone through the program.”

Mueller and Yarnall-Schane will continue the organization’s original mission and have plans to offer additional programming. Mueller is currently finishing her M.F.A. in acting at Indiana University, where she has taken specialized classes that could be adapted for younger students. These include clowning, comedy, stage combat and devising.

“Devising is particularly interesting for this age group, because young students are so exceedingly creative,” she said. “Devising is a theatrical process in which the actors create their own script or performance based on an idea, picture, theme, object or some other form of inspiration."

A perfect fit for Happy Valley

Over the years, Singing Onstage has served children and teens from all over Happy Valley. After-school and evening programs during the academic year, and extensive summer camps, gave local families opportunities for their children to engage in the arts outside of a school environment.

Mueller and Yarnall-Schane agree that the area is a perfect fit for Singing Onstage and noted the strong network of arts-based businesses in Happy Valley.

“I am excited about the possibility of Singing Onstage partnering with other performing arts organizations in the area. State College is full of supportive families who want to see their children engage in the arts and we hope that we can be a place for some of those children to come and learn about the joys of musical theater,” Mueller said.

At the core, Mueller is a teacher who inspires. She knows the joy that performance can bring to the individual and to others. She understands that guiding youth to be vulnerable and brave enriches our entire community. Mueller said, "As theater makers, we are primarily storytellers. I love that these stories can inspire empathy on a deep level. The stories we're telling may be fictional, but the way they make you feel is very real.”