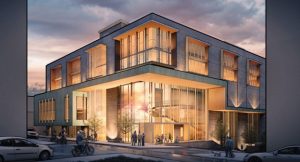 The Nittany Performing Arts Center would be located at the corner of Beaver Avenue and Pugh Street in downtown State College. Photo: Wilson Butler Architects

One of the many benefits of living in a university town is the opportunity to attend big events at first-rate venues. Big Ten football, basketball, baseball, wrestling — it’s all here. As a bonus, we use some of these spots to bring in the occasional big-name performer. In March 2023, Bruce Springsteen will rock the Bryce Jordan Center. Eisenhower Auditorium is home to traveling Broadway shows and the State Theatre hosts a variety of live performances. So what’s missing?

Retired conductor of the PA Chamber Orchestra, Douglas Meyer, believes Happy Valley is missing that sweet spot — a “just right” fit for rehearsals and performances. He believes that a multi-purpose theater is what downtown State College needs. “A performing arts center of this size is missing in State College. The State Theatre is wonderful, but it’s a smaller theater. There are things that are too big on the Penn State campus,” said Meyer. In contrast, the proposed Nittany Performing Arts Center would offer an 800-seat main performance space, a black box theater with seating for up to 200, dressing rooms, green rooms, classrooms and rehearsal rooms, shared office spaces and a lobby area for pre-concert events.

In a quest to make this vision a reality, Meyer and other interested parties incorporated as a nonprofit organization. Since 2017, they have been meeting monthly to discuss their plans for the Nittany Performing Arts Center.

“People have been wanting this for a long time."

“It became more serious about three years ago, when we got in touch with Wilson Butler architects in Boston. We did feasibility studies and needs studies. We visited every theater in town to see what was there and what was needed. We met with practically every performing arts group that wanted to meet with us,” explained Meyer.

In June 2022, the architects came up with a model. The drawings show the size and scope of the plans, which would cover an entire downtown block at the intersection of State College’s Pugh Street and Beaver Avenue — much of which is currently occupied by a dated parking garage.

The proposed theater would seat approximately 800 people and include rooms for rehearsals and storage, and a shop to create scenery. Photo: Wilson Butler Architects

Finding places to rehearse has always been a struggle for local performers. Meyer explained, “For 24 years we had trouble finding places to rehearse and perform. We would schedule a rehearsal in a public school and when we showed up, someone would say, ‘sorry we forgot, there’s a band concert tonight.’ The Nittany Valley Symphony, the Chamber Orchestra, the Choral Society and various theater and dance groups sometimes have to take their performances to Altoona because we just don’t have the community facilities available to do all the things we need,” said Meyer.

Meyer and The Nittany Performing Arts Organization are careful to point out that they will not be duplicating any existing venues. “When we started this originally, we called it The Beethoven Project, because there wasn’t an acoustically good place for an orchestra to play here,” said Meyer.

"We visited every theater in town to see what was there and what was needed. We met with practically every performing arts group that wanted to meet with us.”

But now, the mission of the organization goes beyond acoustics. The dance and theater groups need specific spaces and layouts for their performances, for example. “They need fly space for the scenery and the flats. They need wing space for entering and exiting. They need a shop to create scenery. They need truck space to bring things into the theater. If you look at the (architectural) drawings, our building has all those things,” explained Meyer. 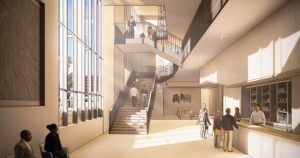 The building would have two entrances: one on Beaver Avenue and a lower entrance on Pugh Street. Photo: Wilson Butler Architects

Fundraising will be a focus for the nonprofit moving forward. The organization has already received donations from The Happy Valley Adventure Bureau, along with 220 other people for a total of $200,000. They will be receiving funds from the State College Borough as well. Meyer elaborated, “Right now spreading the word is the most important thing. Our mailing list is growing and we are getting more people involved. It’s not that difficult because people have been wanting this for a long time. We get donations from $10 to $25,000. They are all welcome.”

Learn more about the project at nittanypac.org.