Badminton, the arts and the best alumni in the world

This feature is part of a series about what makes Happy Valley such a popular destination for retirees. We interviewed individuals and couples about what drew them to the area and about the ways they contribute time, experience, leadership and business knowledge to the community. Hear how today’s retirees are bringing resources and expertise to the area, turning ‘Brain Drain’ into ‘Brain Gain.’ 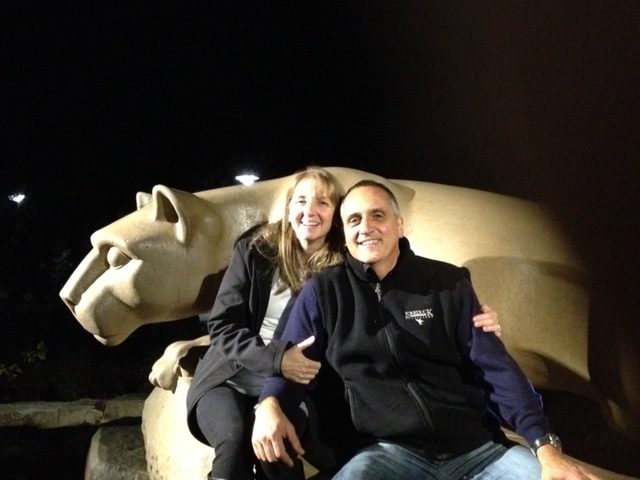 If you ask Deb and Jeff Leo how they ended up retiring in Happy Valley, where they frequently walk downtown, welcome students over for homemade pasta and have fun like they’re still students themselves, they’ll take you all the way back to the beginning: a cold day in badminton class.

It was the winter of 1976. Freezing cold. Jeff was at his badminton class, but couldn’t play because his wrist was injured.

“My teacher asked me to go and help him grade the girls’ class,” Jeff said. “I can still remember it so clearly. There were two girls I noticed right away. There was a girl in red shorts with a Heinz T-shirt that said ‘Where you bean all my life,’ and a girl in Penn State blue shorts with a T-shirt that said ‘München’ — you know, the German spelling of Munich. She seemed like she was so traveled. I hadn’t been anywhere before I got to Penn State.”

“And I said to myself, I’ll talk with the smart one.”

He asked Deb out, and the two became inseparable, getting married shortly after her graduation.

From there, the couple landed in Doylestown, Pennsylvania, just outside of Philadelphia, where they raised their three children while Jeff worked in insurance and Deb taught ESL.

When the time came to retire, they both knew exactly where they wanted to be — something that surprised them both.

“If you hang out with us, you’ll find that we don’t always agree,” Jeff said with a laugh. “But we both really like State College. It’s always felt like home and our kids love it here. At first, we didn’t know where to go, so we decided to go to the place that we both loved.”

“We like all of the activities in a college town,” Deb said. “The arts, music — plus downtown is such a fun place.” The Palmer Art Museum and the Arboretum are in walking distance. They also attend concerts through the Penn State School of Music and performances through the School of Theatre.

They moved to College Heights in 2016, where they bought an old stone house, and have been working to restore and renovate it in a way that makes it their own and still honors the historic features.

The rest of their time is full. “It’s sort of like being back in the fraternity,” Jeff said. “We’re surrounded by lots of camaraderie and people with common interests, a bunch of misfits who have each other.”

Jeff has taken to winemaking, fly fishing and playing in a golf league. Deb is involved with The Art Alliance, creating her glass mosaics and teaching ESL and co-leading a women's reading group for Global Connections, a group that helps international families transition, integrate and succeed within Centre County.

“Interacting with the students who Debbie gets to teach, seeing their culture and their reaction to being here — it’s something that’s really enlightening to us,” Jeff said.

They love having some of the international students over for homemade pasta. “Since the students had only been here for a few months, they were curious as to how we lived and, and, of course being students far from home, they didn’t turn down a home cooked meal,” they said. “Everyone had so much fun and the students said that it was the best day they’d had in the country so far.”

The couple said Happy Valley checks other boxes for them as well.

“I’ll tell you — the mountains, the scenery, the hiking, biking. Plus, there are still many connections along the East Coast. We are not as close as we used to be, but we can still get back to visit Philadelphia and New York City,” Deb said.

And, back to the day when Jeff met Deb, wearing her Penn State blue shorts, it’s a place that has something that nowhere else can quite replicate.

“Penn State has one of the biggest and most loyal alumni groups in the entire world, and there’s something to that,” Jeff said. “A lot of people love Penn State and come back here to support the University and enjoy State College. Living here makes it easy to make new friends and reconnect with old friends.”

“Once I heard Penn State fans were referred to as a cult,” Deb added, “and I hate that! It’s not a cult at all — it’s more like a brotherhood that promotes love.”

“If anything sounds like the description of a cult, it’s what you just said!” Jeff said with a laugh. “But seriously, it’s a nice place to be, when you wake up and appreciate where you are. We aren’t here because of a job transfer or whatever — we’ve chosen to be here. Everyone wants to visit because it’s a fun place.”

“Plus, we get to wear a lot of blue and white,” Deb added.