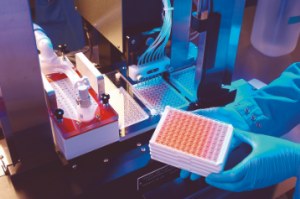 There’s empty office space in the Lubert building. All furniture is long gone. Red tape marks the drywall to show where the new sleek glass walls will go. The space has housed its share of big ideas. It’s the Lubert Building, after all, the second building to open in Innovation Park. Home to countless businesses, an office for the Department of Defense, Penn State’s College of Communications. But this space, awaiting renovations, might not necessarily house the next “big idea”. Instead, it’ll witness the newest chapter for a company that started out as a "little idea" and has been changing the salivary bioscience world for more than 20 years.

Maxing out credit cards on a leap of faith

According to Founder, Douglas Granger, Salimetrics began in a “dark, underequipped basement lab” at Penn State in the 1990s. Salivary cortisol was attracting considerable empirical attention, and the research findings were high-impact, but Doug and his team noticed that assays used in that research were being developed largely in-house by academics. Since methods weren’t standardized and weren’t optimized for use with saliva, comparing data between studies was a challenge.

“At that time, the immunodiagnostic industry was unwilling to develop and commercialize assays designed specifically for saliva," says Granger. "Our team recognized the importance of better assays to this emerging scientific endeavor.

That led our group to take a leap of faith that would result in the much needed "step up" in assay quality, precision, accuracy and standardization for salivary cortisol. So, we maxed out our credit cards and charged ahead."

When his team released the Salimetrics Salivary Cortisol Assay Kit in 1998, it marked a new beginning for salivary bioscience research. For the next twenty years, the company witnessed exponential growth in knowledge facilitated by salivary bioscience research. Advancements have included salivary measures of environmental chemical exposure, infectious disease, metabolomics, oral microbiome and inflammation.

Salimetrics now provides more than 20 different high-quality salivary assay kits and also offers saliva testing services for researchers without access to high-quality saliva testing labs. Their work has enabled researchers from across the world to use chemical markers in saliva to detect and measure a vast number of biological changes, from the stress hormones of soldiers in combat to the synchronized hormones of newlyweds in love.

According to Granger, these advancements are thanks in large part to Dan Leri, Innovation Park and Ben Franklin.

The road to becoming one of the earliest successes

Granger continues his work as chief scientific and strategy advisor for Salimetrics and is also a Chancellor’s Professor of Psychology, Public Health and Pediatrics and founding director of the Institute for Interdisciplinary Salivary Bioscience Research at the University of California, Irvine. He muses that if he had started Salimetrics while he was a faculty member in California, it never would have gotten off the ground.

“The workers would have been much more expensive, and it would have taken a much larger investment to get it off the ground. Plus there weren’t resources like Ben Franklin to help us in California. There is startup help, but most investors are looking for the next big thing – the next million-dollar idea – not the next little thing that could grow.”

Even for Penn State, he says the idea was a fairly new one. “You have all these super smart people at Penn State, but in the late nineties, relatively few companies were coming out of the university. We were one of the early success stories. At first, the deans didn’t know what to do with the idea, but it was Dan Leri and his team who got Penn State to realize that this was something it should endorse.”

“Motivating us to pursue what was right”

Salimetrics moved into a corner of the Lubert Building, and Doug says, from the start, the resources available through Ben Franklin and Innovation Park were there to guide them along the way.

“We never went through really tough times,” Granger says, “but we went through plenty of times when we needed advice or needed to change. Dan was consistently Johnny-on-the-spot. Even today if I needed help, I know I could reach out to Dan and he would be there. There is genuine interest, not just in the numbers, but in our vision for the company. He has always motivated us to pursue what we thought was right, and then supported us along the way. It’s like having an uncle who is always ready to help when you need him. If you have an issue, you just run a flag up the pole. It’s instant connections."

It was in this environment that Salimetrics expanded and grew. By 2013, more than 20,000 researchers were using their products, and their assays were used in more saliva-related published papers than any other assay in the field.

In 2013 they relocated their technology center and saliva testing laboratory to Carlsbad, California. However, their office staff, manufacturing and fulfillment portions of the company remained in Innovation Park, right where they began.

By the end of 2018, Salimetrics was ready to grow and expand…again.

As they’ve grown, the Park benefits them in different ways

“It’s interesting,” Scott Fozard, the company’s CFO says. “Throughout 2019, we looked both inside and outside Innovation Park when we decided we needed more space. But after we looked at buildings in other locations, we decided that everything that this space offers us is what has helped us get to where we are now.”

He also notes that at this stage in the company’s development, the benefits of staying in the park are markedly different than the things that brought it there as a startup 20+ years ago. “We started here because of the support of Innovation Park itself, and Ben Franklin, and the access to resources at Penn State. As a more established company, those aspects aren’t quite as important. Now, it’s cost, convenience and great access for our commuting employees.”

Beyond finding office space, they never questioned staying in State College. Granger says that there is a big benefit of keeping their manufacturing operations in central Pennsylvania. “We have people who are so hard working, committed and loyal. Turnover is low. We have a lot of people who grew up here, moved away for several years and came back to be close to family. There are generations of hard workers in central Pennsylvania.”

Although Scott Fozard grew up in Pittsburgh, he also boomeranged back to Happy Valley and stayed. He graduated from Penn State in 1989 and worked in Atlanta and Pittsburgh before returning to the area in 1999. “This is a great place to raise a family, and that’s what keeps me in the area. Salimetrics is a great place to work – we have autonomy and the owners are great. You jealously guard things that are valuable to you, and I think it’s a great fit.”

Pam LeHota, Salimetrics human resources manager, says the company’s culture is a big factor in employee retention. “The culture here is friendly – it’s very human,” she says. It’s just been within the past year or so that their very first employees have started to retire after 18 and 20 years of work.

While still working out the details, within the next few months renovations are expected to begin to expand Salimetrics’ current space from 6,500 square feet of disconnected lab and office space scattered over the third floor of their building into a cohesive 8,500 square foot block comprising half of the floor. This layout will be more efficient for their manufacturing and fulfillment and allow more storage space for an expanded line of assays.

More space will also help Salimetrics evolve as salivary research evolves. In the beginning, customers were researchers, but not clinical researchers. Now, Salimetrics sees more clinical projects and people using their tests as tools to enable them to make decisions about people’s health. “We are evolving as bioscience evolves,” Granger says. “We began with analytes – hormones, stress, cortisol – now we are expanding the menu options to include things like inflammation and infectious disease, new things for our activities.”

New saliva tests that will be able to be manufactured in the new area include assays for total, and disease specific, antibodies, which will indicate acute infection and history of exposure to infectious disease.

After those assays are released, they will begin more. The company’s goal is four new assays per year, based on the needs Dr. Granger sees in the market, and this new space will allow them to continue to increase that portfolio.

A testament to everything going right

As Fozard walks through the new space that the company will soon inhabit, he says that it’s a testament to a story of everything going right.

“I really see Salimetrics as a success story of small business in America,” he says. “We aren’t big – we have a little over 30 employees – but we are supporting a lot of families on both sides of the country.”

It’s a success story for more than just them, Doug Granger says. “It really should be an inspiration for other ‘little ideas’ out there. You don’t have to have an idea that will spin off multi millions of dollars. The economy needs the big ideas and the small ideas. We’re proof. We did it.”