In his recent article about the impact of COVID-19 on higher ed, author and NYU professor Scott Galloway predicts which colleges and universities around the country will struggle, survive, face challenges or thrive.

According to Galloway, Penn State will merely survive post-pandemic, but not thrive. Can Penn State embrace its land-grant mission and turn disruption into opportunity? 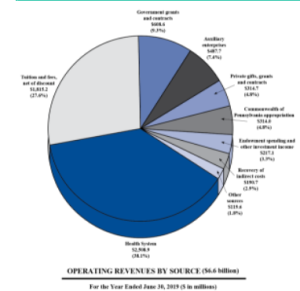 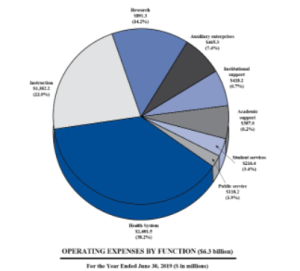 The financial pressures facing higher education aren’t new and the global pandemic is only intensifying the crisis. Scott Galloway, professor of marketing at NYU’s Stern School of Business, has recently become a frequent media guest, promoting his perceptions of higher ed in the time of COVID-19.

In ‘USS University’, Galloway reviews specific data on more than 400 U.S. universities and rates their likelihood of withstanding the pandemic’s economic impact. His team compared schools' values (credentials, experiences and education values over tuition cost) and vulnerabilities (endowment figures and percentages of international students). Ultimately, each school ends up in one of four quadrants: thrive, survive, struggle or face significant challenges (in Galloway’s original version of the article, the fourth quadrant was titled “perish,” but it’s since been changed to “face significant challenges”).

According to Galloway, Penn State will survive, along with 127 other institutions, including respected names like Carnegie Mellon and Clemson. (Only two Big Ten schools met the "thrive" criteria: Michigan and Northwestern. Nearby Bucknell and rival Pitt also made the thrive list, thanks to their cost-to-value ratios.) Penn State’s survive ranking marks the university as "highly vulnerable due to its low endowment-per-student rate and dependence on full-tuition international students," despite its high marks for value and overall credibility.

Companies and institutions fail. Industries collapse, leaving entire towns in their wake. From newspapers to retail, railroads to travel agents, these once-thriving industries learned if you don’t evolve, you die. With tuition skyrocketing 1400% over the past 40 years and little innovation to show for it, the pandemic has become an accelerator for disruption in higher ed. Many people have been calling for the bubble to burst long before Galloway. And big-time college athletics means big money to college towns, no question.

So, will COVID-19 be a wake-up call for Penn State? And, if so, to what new reality?

A look at Penn State’s revenue mix shows it’s diversified. Tuition makes up just 27% of Penn State’s budget, and instruction just 22% of its expenses. The Pennsylvania legislature designated Penn State as the Commonwealth's sole land-grant institution in 1863, which eventually broadened the university's mission to include teaching, research and public service in many academic disciplines. It might be closer than ever to fulfilling it today.

Penn State Health, based in Hershey, is moving rapidly into Lancaster and locally into State College. At nearly 38% and growing of Penn State’s $6 billion in total revenue, it’s likely only a matter of time before the University acquires Mount Nittany Health.

In comparison, athletics, a line item under Auxiliary, accounts for about 2.5% of the university’s revenue and expenses. Last year, Penn State Football, just 1.6% of Penn State’s total revenue, contributed Operating Profit of $54 million, about 16.5% of a total profit of $329.9 million. So certainly, administrators will be grappling with this loss in the current academic year.

• Transforming Education.
Penn State will be a leader in the transformation of education, including enhancing access to it, as it fulfills its land-grant mission in a 21st-century context and continues to drive discovery-focused research across disciplines.

• Enhancing Health.
Penn State will be a leader in promoting quality of life through comprehensive approaches to enhancing personalized and population health, achieved through a commitment to and investment in relevant research, education, clinical practice, and outreach.

• Stewarding Our Planet’s Resources.
Penn State will be a leader in creating comprehensive solutions to mitigate the dangers of climate change and address the challenges of providing safe and abundant water, clean and renewable energy sources, and plentiful and nutritious food.

• Advancing the Arts and Humanities.
Penn State will be a leader in the arts and humanities, utilizing them—along with the sciences and other disciplines—as agents of change in addressing complex global issues.

• Empowering Through Digital Innovation.
Penn State will be a leader in preparing students for success in the digital age and use digitally optimized outreach to foster economic prosperity in communities across Pennsylvania and beyond.

Meanwhile, Penn State’s World Campus has been hailed as a global leader in online education and given Penn State a reputation for being ahead of the Ed Tech curve. This foundation, along with 23 well-established Commonwealth campuses, creates an opportunity for Penn State to broaden its student experience with blended learning—enrolling more students through online innovation, while maintaining core elements of the on-campus Penn State experience. Athletics, THON and campus-based activities like Greek life, theater, music and intramurals will struggle this year, but will likely rebound and even grow post-pandemic as students seek those live interactions.

What gives a University and a community staying power? Where should the focus be when righting the ship through a storm of disruption? We’d be wise to take Galloway’s perspective, not just to analyze our chances, but to go deeper into the opportunities that have the potential to pull us through.

To his point, in times of disruption, some will perish, some will thrive, some get caught in the middle like former retail giants JC Penney and Sears, floundering for years before finally fading away. Penn State and Happy Valley seem to be in a solid position to marry the best of a tier 1 globally-renowned research institution with growing local tech sector, geographically situated in an ideal live-work-play environment. Real estate continues to boom as COVID drives people from big cities to more spacious, but still robust areas like ours. Along with 700,000 Penn State alumni, many dominating the C suites of America’s best companies, we are betting on Penn State Thriving.  Move over Silicon Valley and Stanford.